Britain will soon be taking a call on the 280 mn Pound a year development aid it has been providing to India.

A bit about it: UK considers India to be a key strategic partner, and it also realized some years ago, that while India has been growing at a rapid pace, it still is home to one-third of the world’s people who live below $1.25 a day, and the average income is one-third of China’s. They also identified 8 states in India where 65% of India’s poor resided. Three of these states, Bihar, Madhya Pradesh and Orissa became core focus states for UK’s Department for International Development (DfID).

Now, despite the economic crisis and slowdown that UK has been facing for several years now, it has been benevolent enough to offer an annual 280 mn Pound aid to India.

But are we Indians so ungrateful and unconcerned, through this period, and now when UK is re-assessing that aid (perhaps reduce it or pull it back altogether), we act like a bunch of stupid bums with our ridiculous comments:

When Pranab Mukherjee was Finance Minister, he had dismissed British aid calling it “peanuts”.

Today, P. Chidambaram says we did not need the aid.

Both he and Khurshid have been chanting things like “Aid is past, trade is future”.

Why the hell did we take it if we didn’t need it? And why show unnecessary attitude towards the UK in this regard? When initial discussions for the aid were taking place itself, we could have told the British minister heading DfID that we could take care of the finances for initiatives to those 8 of our Indian states ourselves, and that we perhaps could use their assistance with regards to ensuring that our finances have maximum benefit to those 8 of our states. We could have told the British that they could either focus those funds inward, towards benefiting their own economy, or perhaps towards countries much more in need of the aid, instead of us. But did we do any of that?

On one hand, we have a scam surfacing ever few weeks, which proves that there is sufficient and more funds to focus not only on 8 of our states, but on all 28 of them plus the 7 union territories, and yet have some funds for similar initiatives abroad, where we could offer aid to needy countries.

But we were, and perhaps will be, too busy filling our own pockets to bother.

Greed in itself is bad, but greed accompanied by this kind of ignorant arrogance, much worse. 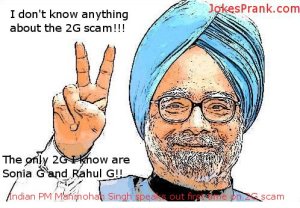