Does Your Fire Escape Plan Work?

Early hours of 29th December saw a horrific fire at a rooftop restaurant in Mumbai. I could hear a continuous stream of distant sirens just before going to sleep. I couldn’t have imagined the extent of death and destruction. The restaurant is a breezy rooftop one, with plenty of bamboo and plastic on the premises. And the staff, towards making the experience more memorable, had a fireworks show on. A possibly illegal structure. A common, narrow exit for 3 restaurants. The result, 15 dead, including a girl who was there to celebrate her birthday. A very tragic, and avoidable mistake.

Many of those who died, were huddled up in the bathroom, after having mistaken it for the exit.

While the media was quick to blame the owners and management, it seemed like the municipal corporation managed to slip out of the spotlight. They are responsible for enforcing safe design, entry/exit criteria, and even ensuring collective safety of an area, as they have a birds eye view of it. However, I have seen numerous restaurants and bars over the years, springing up right next to each other in this seemingly haphazard layout. And as per different sources, many of the establishments are illegal.

A social media friend of mine had a great idea of having Google encourage users to share the Fire Exit plan of establishments and hotels, so that those planning to visit can get a sense of  the exit strategy beforehand.

While it would certainly help, I think establishments need to rethink their Fire Exit Plans themselves. Over the years, at several places, I have seen Fire Escape Plans stuck upside down at premises.

While I was pretty savvy with survey maps in school, an earlier role of mine involved numerous meetings in sprawling industrial areas, and I’d use their map to navigate from company to company located there. And whenever I had colleagues with me, I saw how they struggled to understand and guide me while I drove around. And these were amazingly clear maps that I felt one could figure out, no matter from which direction they looked at it. If those were tough to understand, imagine expecting someone to try to understand a floor plan in the urgency of a burning building.

This is what an average Fire Escape or Floor Layout plan looks like. 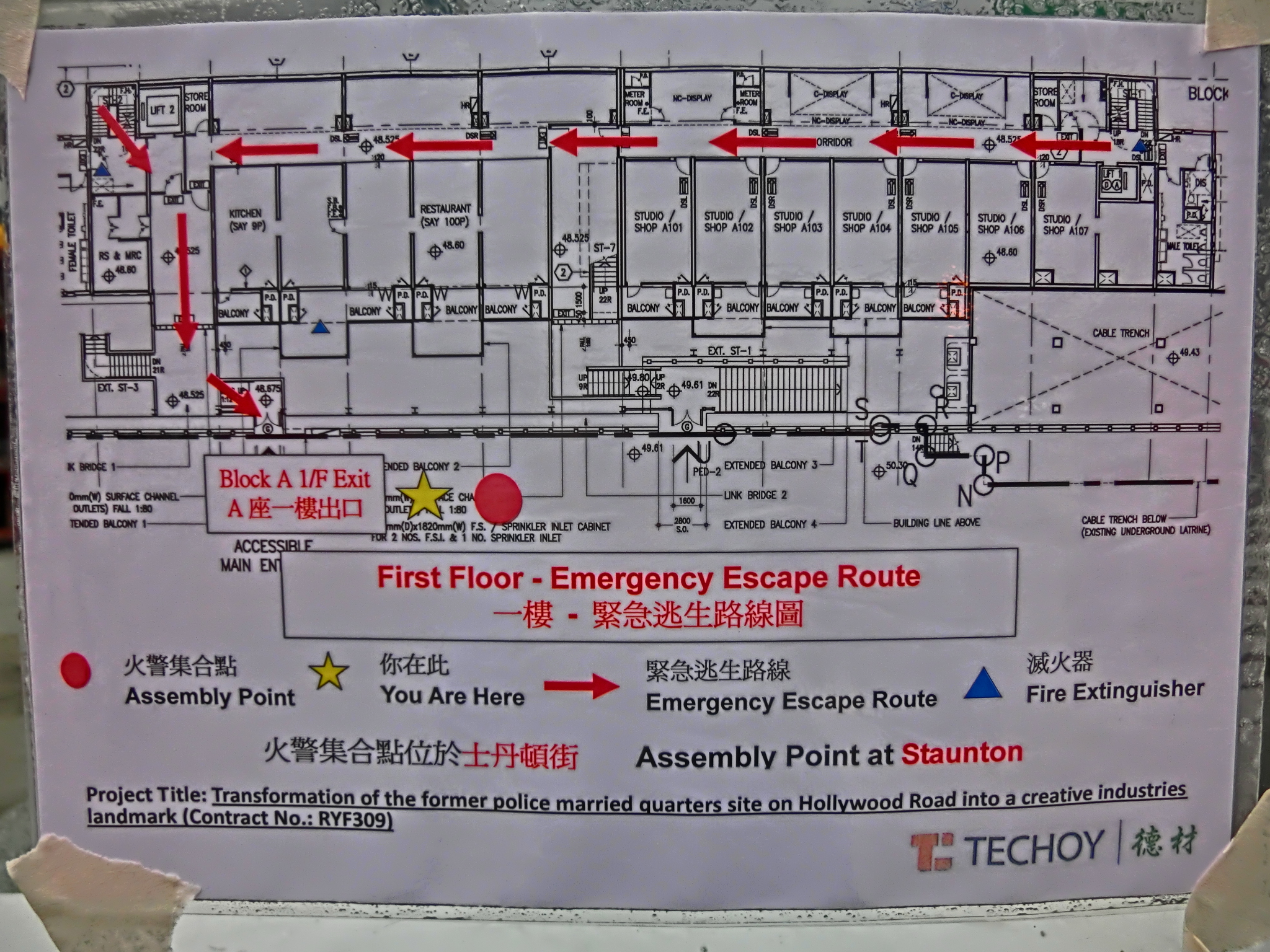 However, maps need to be better designed to serve the purpose of guiding people both in normal times, and in emergencies.

Which means, the layouts need to be layered, using appropriate colours, to allow for prioritized access of important information. How this can be done, is by using a slightly lighter (possibly grey) colour for the more detailed schematics, and bright colours and simpler steps to direct people in an emergency. 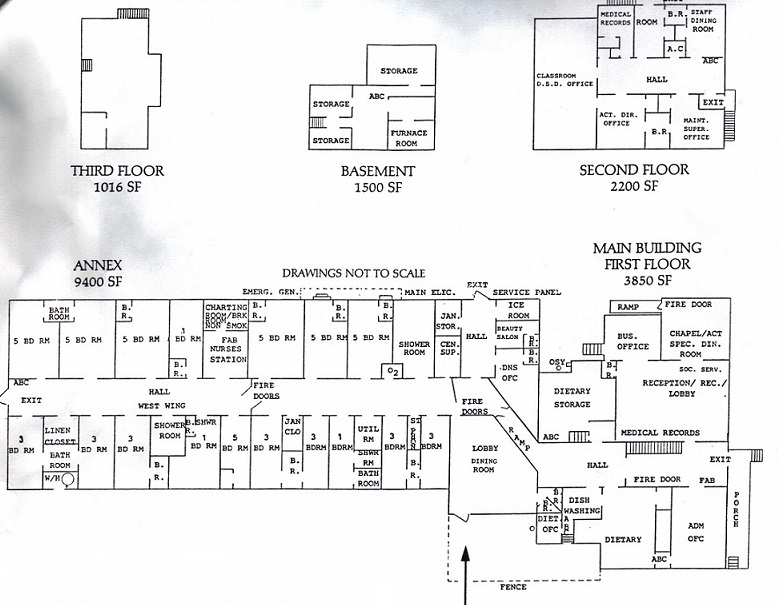 This is the kind of floor/escape plan you see at many places. However, it can be extremely confusing to understand in the panic of an emergency. These plans are on walls to serve a purpose, emergency exit! Which means, users don’t need so much information. A map must offer the entire schematic in a slightly light colour. This way, in regular times, people can take a moment to stand close and figure their way out. Bright colours should highlight the shortest paths to be taken in emergencies. And this information should stand out in a glimpse. And maps should be customized for each section of every floor. That way, such important information should be rapidly accessible when the need arises.

For smaller establishments, a map near the entrance will give people an idea about available exits, as they walk in.

The objective should be for information to come out in stages, depending on the urgency. For those in a hurry, just the fire exit. For those working in their way around, a few more moments to understand the layout.

Restaurants in the area were quick to bounce back after this incident. Hopefully the tragedy will remind businesses to put people before profit.

On reading this post, Dr. Patell, a great buddy of mine, sent me some valid points that could really save lives, if factored in. Here they are:

A few thoughts on Fire Safety in view of the recent fire in pubs/restaurants. From what I have read or seen on TV fires in pubs/discos are disastrous all over the world because of the numbers packed into the area, compounded by the fact that these P/D tend to restrict entry/exits to prevent gate crashing. This itself is a deterrent to rapid exodus in case of an incident. In the recent fire what was observed was the following:
a) A very narrow Fire Exit passage leading quite a distance to the fire escape door
b) Mistaken entry into toilet door as a possible escape route
c) A fortunate door separating two areas which was locked
My thoughts firstly on these three:
a) I do not know if there is any norm for distance to the actual Fire Exit to the width of the passage. In my opinion, if the passage is about 20 ft long, from the door of the premises to the actual Fire escape then the width should be at least 25 to 30 % or say at least 5 to 6 ft wide. The door at the end of this passage must be equally wide to avoid interruption in the flow of people. This is perhaps utopian, but can there really be adequate exit for say 300 to 400 persons being packed into the P/D. One must also consider that many of these are on higher floors of a building. Such long passages must be avoided and in the planning the Fire Exit must be as near as possible. Additional Exit at the other end on large premises must also be provided.
b) Here also the following may be considered. The door is usually labelled Gents/ Ladies Perhaps an additional board, in luminescent sign, saying NO EXIT could perhaps help in not mistaking the door in an emergency.
c) Where there is fortunately a door separating two areas, which are independent of each other, this must be kept accessible in case of emergency. If, for security reasons this needs to be locked to prevent unauthorised entry, the following could perhaps be thought of as a possible solution. The door should be locked by a key lock. Both sides should place one key in a small box with a glass front, as is used for the fire alarm. In case of emergency, the glass is broken, the key accessed and the door opened. Of course, there will always be apprehension, that this may be misused. Now several systems are available where an alarm sounds once the contact is broken on opening the door. This could be placed on either side.
These are possibilities for what came to mind on seeing the tragedy. The very main systems for such establishments do not seem to have been in place. Were there smoke alarm systems, what about a well designed sprinkler system. The pyrotechnic display would have triggered the system and hence may have been avoided. Was there adequate water supply storage for such sprinkler systems. Portable fire fighting systems, and were the staff trained to use them, or were their skills only tossing booze bottles. Has any authority calculated, how many persons would be in each restaurant at any given time including peak occasions. Are systems in place to a) take care of one such establishment and b) all in that particular area. I am sure there are experts in this field, who could advise. But ultimately their advise must be scrupulously followed.