Attention! Is this the Police?

Last evening I went to pick up some things for home from the department store. Visits to that store isn’t exactly something I look forward to. Considering the place is a little dusty, and the staff is slow and clueless. And for some inexplicable reason, they keep shifting some sections around every other time.

Anyway, while parking outside, I noticed two police constables standing beside a car nearby. I assumed they must be waiting on a senior officer who might be in one of the neighboring buildings.

I picked up the things on the list, and had just gotten into my car, when I saw a woman and her 6-7 year-old son get out of the store with a few shopping bags on them. They headed straight for the car where the two cops were still waiting.

And then, the hard-to-believe happened. The woman and the boy handed the bags to the two cops, who then loaded them into the trunk of the car. It took me a few moments to process what I’d just seen.

As I type this, India is being taken to the dumps or worse. By corrupt politicians, obsolete laws from another era, and more corruption. The dismal safety conditions that citizens have to put up with, speaks poorly of a weak system. And unappreciated and over-worked enforcement bodies, a large section of which, is deployed for political (politician plus family) security. And if that wasn’t bad enough, I had to see the pits of it, with officers of the law being made to load vegetables and other grocery into someone’s car.

Whether the car belonged to a politician or a senior police officer, I really don’t know. But either way, let’s look at it from the point of either of the two officers, who were perhaps in their late 30s/ early 40s. Young and driven, they obviously would have joined the force to protect and serve India, not to serve the public servants [politicians]. Then why was the job description of these officers changed, and by whom?

Look at it from the point of view of such officers. They obviously didn’t sign up for such a role. And how many weeks or months, do you think will pass, before all the dreams, aspirations and enthusiasm they joined the force with, leaves them?

Let’s look at it from the point of view of the woman with the kid. If appearances are anything to go by, she came across as well-educated. Why then, did she not see the terrible crime in playing along with something like this, if it wasn’t her idea of course. Whether the reason was a driver on leave, urgent need for home supplies, or whatever, was not reason enough to divert an officer of the law for such absurd and petty tasks. It’s a crime.!

Imagine the little boy now. What impression, and how much respect for the police will he grow up with, when there he was, handing over bags of grocery to two of the departments officers.

Heads up Mr. Satyapal Singh [Commissioner], the average Indian has little respect for politicians. It’s up to you to help us retain our respect and faith in our police force. 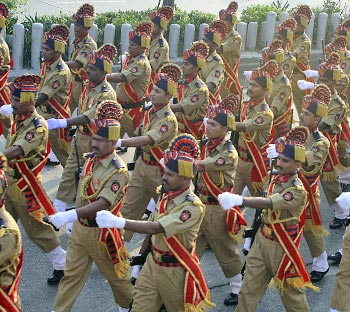